Skillshot Media and Ghost Gaming launch collegiate esports program across the state of Georgia in support of competition and careers.

The Georgia Esports League, organized in partnership with the Georgia Department of Economic Development and the Georgia Film Academy, is a statewide collegiate league, academic curriculum pathway, and workforce development platform to help students get a job in gaming, esports, and digital entertainment. 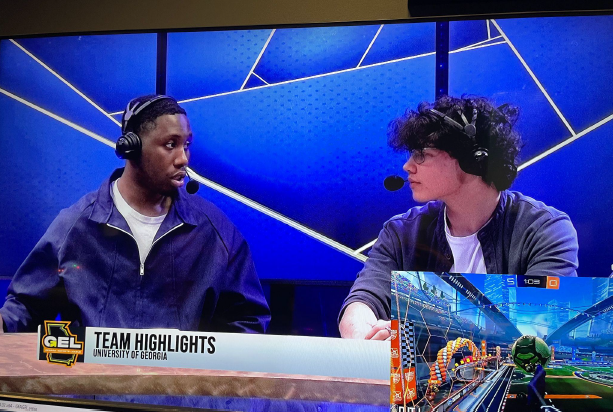 College students at the Skillshot esports analyst desk comment on the Georgia Esports League competition between rivals Georgia Tech and the University of Georgia in the game Rocket League.

The announcement comes at a time of increasing live esports event activity across the state. In May Skillshot, EsportsU, and the Collegiate Sports Management Group (CSMG) produced the Collegiate Esports Commissioner’s Cup (CECC), the largest ever national collegiate esports live event, at Gateway Arena in College Park Georgia which delivered a $1.7 million local economic impact. This October Riot Games will bring the Worlds 2022 League of Legends semifinals to State Farm Arena, and in November the global gaming festival Dreamhack returns to the Georgia World Congress Center with an expected attendance of over 40,000.

The Georgia Esports League, open to all 2-year and 4-year colleges in Georgia, will offer numerous titles starting with Rocket League, which is played across Georgia in middle school, and high school as a sanctioned varsity sport. It is also played at the collegiate and professional level. Atlanta-based Ghost Gaming has a top professional Rocket League team. The tournament platform provider and sponsor for the 2022-2023 season of Rocket League is UGC

“Esports is education,” said Todd Harris CEO of Skillshot Media and Ghost Gaming. “We’re excited to build out skill development that goes well beyond just playing games. Our partnerships in Georgia allow us to engage with students starting in middle school with STEAM exposure and social-emotional learning all the way through college competition to careers playing esports professionally, becoming a gaming creator on YouTube or Twitch, or working in the broader game and digital entertainment industry behind the scenes as a programmer, artist or designer.”

GEL Final matches will be produced and live-streamed by Skillshot out of their newly announced Atlanta esports campus, with students involved in every aspect of the production.

“Gaming and digital entertainment are key industry initiatives for Georgia,”, said Asante Bradford of the Department of Georgia Economic Development. “The Georgia Esports League will help attract college students across our state to this growing industry, so we can continue to fill the jobs posted by the many tech and digital media companies relocating to Georgia.”

Georgia has seen a host of gaming and tech companies announce major expansions in the last 12 months including a Microsoft corporate campus on 90 acres of land on the west side of Atlanta, Meta’s data-center expansion in Georgia valued at $42 billion, and Google’s 500,000 square-foot expansion in Midtown Atlanta. More broadly, the global corporate and VC investment into metaverse companies was over $120 billion in the first half of 2022 according to a McKinsey and Company report. The metaverse industry is projected to reach $5 Trillion by 2030, with a $108 - $125 billion impact specific to the videogame industry.

Georgia is leading this new digital entertainment economy, building off the success of the film industry, which saw a direct spend of $4 billion dollars in Georgia last year. A key partner for the newly announced Georgia Esports League is the Georgia Film Academy, which has already trained over 10,000 Georgians through 28 public universities and technical colleges.

“Building off our success in film, Georgia’s next workforce initiative is gaming, esports, and digital entertainment”, said Jeff Stepakoff, Executive Director of the Georgia Film Academy. “We are thrilled to partner with industry experts Skillshot Media and Ghost Gaming to build out the curriculum, deliver hands-on experiences with industry tools, and engage students via Georgia Esports League competition, events, and live-streaming. Georgia now has a full ecosystem around the world’s fastest evolving creative economy.”